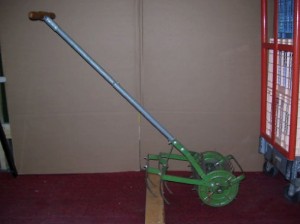 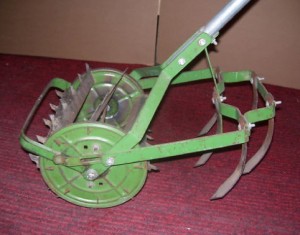 Thank you to Michael Pill for donating this tool.

This is a Rowe Manufacturing Company “Ro Ho” gardener or garden cultivator. It was produced in Galesburg, Illinois for many decades by that company, with similar models produced by other companies.

The toothed wheel helps break up the soil surface. It can be used two ways. With the five long pointed cultivator teeth to the rear and pointed down as the tool is wheeled through the garden, it cultivates the soil. Turned over and used as shown in the advertisement with the teeth pointed up and the weed cutting blade going through the soil behind the wheel, it serves as a weeder.

Like the historic Planet Junior hand-pushed seeders and wheel hoes, these tools greatly increase productivity of garden labor. A “Ro Ho” or other wheel hoe tool can accomplish in a few minutes what it would take someone with a hand hoe or a hand weeder hours to accomplish.

These tools were very widely used from the late 19th century up to the mid-20th century, when many people gardened. The movement probably reached its peak during World War II. Food (and everything else) was strictly rationed during the war, so the only way to get more food without dealing on the black market was to grow it oneself. There was a nationwide Victory Garden backyard gardening movement that by 1944 produced one third of the vegetables grown in the United States.

This entry was posted in 6. Donations. Bookmark the permalink.